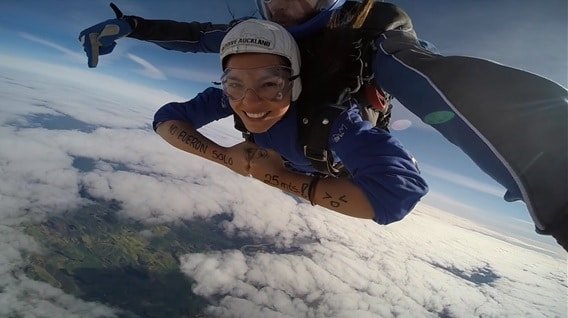 “I could even wear jeans again and, after like 2 years, I’ve been able to wear high heels again too! Epic win! ”
– Geralyn Reyes

Before Geralyn had knee pain, she was a very active athlete. She used to play volleyball, swim in the ocean on weekends, go to the gym, and do Insanity (a high intensity workout program) throughout the week. At some point, it became just too much, and she started feeling some pain in her right knee. She didn’t pay much attention at first, but after a couple of weeks, she couldn’t stand up after a volleyball game. Both of her knees were causing her an intense amount of pain.

She was diagnosed with torn ACLs in both knees, and was forced to lay in bed for an entire week. Fortunately, it was a partial tear, so she didn’t have to go through surgery, but instead was guided towards physical therapy. After 2-3 weeks of physical therapy, she was starting to feel much better and excitedly went back to her normal, active routine. Unfortunately, this backfired and the pain was back in a whole new way. Since Geralyn was moving to the OC, a new state with a new job, she felt she couldn’t do anything about it, and decided to just endure the pain for four months.

One day while she was driving the 30 miles home back from work, the pain was so bad that she almost couldn’t drive and had to practically pray to get home safe. At this point, driving became her worst nightmare, stairs were her number one enemy, and she couldn’t even stand up for longer than 10 minutes. In those 4 months, she quit all sports, switched all her pants for less constricting leggings, and found it difficult to simply leave her bed. She originally thought it was her torn ACLs that were hurting again, which led her to try doing some of the things that helped her recovery before. But this turned out to not be the case.

Geralyn took to Yelp to find some physical therapy clinics in the area. After quite a few searches with not very good reviews, she came across Coury & Buehler, which had plenty of good reviews. She went to a physician, got some MRIs done, and was surprised to discover her ACLs, as well as all other tissues and bones, was as healthy as could be. She was sent to a rheumatologist and was diagnosed with hypermobility syndrome and positive ANA (which is indicative of an autoimmune disorder). She was told there was no promise physical therapy could help with this, but she figured it was her last shot.

Geralyn was a complete skeptic about PT at this point. She had only received bad news again and again about her knees, and was just in a “this is my last resort” mind set. During her first examination with Ro, she remembers thinking “let’s see if you can do something”. She recalls feeling depressed during her first examination because she now found it incredibly difficult when Ro would instruct her to do simple lunges and squats. Even when she was at her lowest points, she pushed through it. Through Ro, and other PT’s, patience, positivity, and expertise, she started to feel like her life was back on track.

Geralyn now has no problem driving long distances, and she even drove from California to Vegas! She’s back to living a life of adventure – tackling stairs, going on tours, and completing a three hour uphill trek (5,400 meters above sea level to be exact) in Peru, and these are just the beginning. She’s been able to climb, walk, jump, hike, and swim again thanks to the pain reducing exercises Ro taught her. And the best part? Geralyn is able to rock her jeans and heels again after two years.