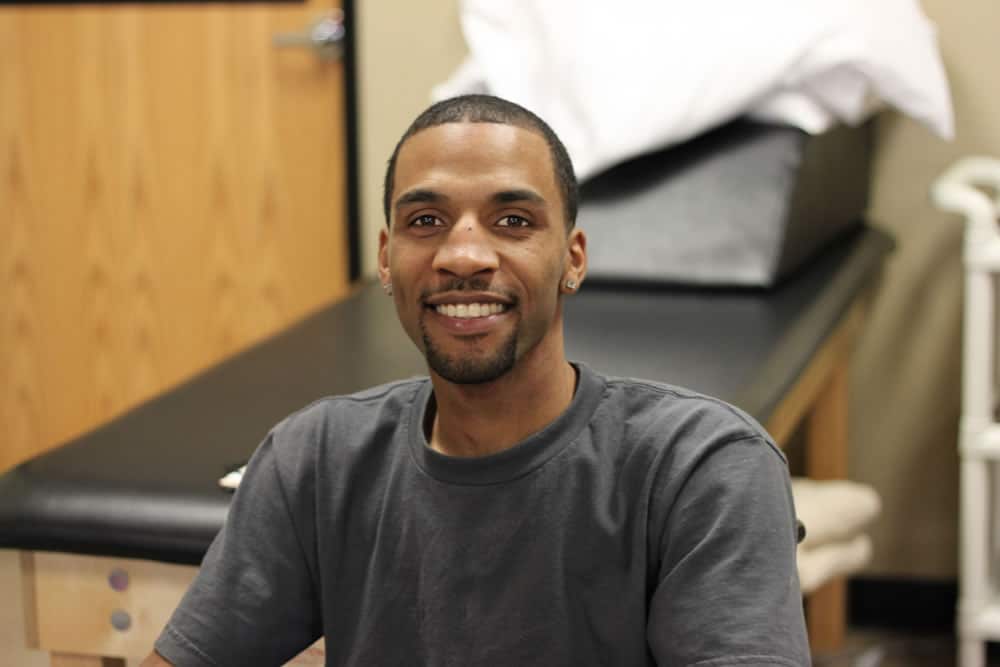 “I’m getting stronger in a lot of areas, especially functional movement, which is making me more positive for future improvements.”
– Chris Hutton

Chris Hutton, now 30 years of age, is a current patient recovering from a severe accident that took place 9 years ago this April. At the time of his accident Chris was at the end of his second year at the University of Pittsburgh where he played on their basketball team. From being a high level athlete and living a very active life style, Chris’s life took a dramatic turn that forced him to rely on others for help with simple daily activities. Chris was involved in a severe car accident that left him paralyzed from the neck down. Chris shattered multiple vertebrae in his neck, becoming a quadriplegic, which significantly affected normal use of his arms and legs.

Because of his accident, Chris had no feeling or use of his arms and legs and was told that he would never be able to stand or walk again. Everyday activities that he used to love seemed a thing of the past. Eating, bathing, dressing and even turning door knobs all became a struggle and walking or playing sports was now impossible. The changes that Chris has gone through have made the simplest of tasks, like getting ready for the day, a significant chore.

Chris, now 9 years later has miraculously restored feeling into his arms and legs and is able to control some muscles which is pushing him to become stronger, and may someday be able to walk again. He was advised by his referring physician, Chuan Nguyen, M.D who diagnosed him with an incomplete spinal cord injury, to continue his strengthening with physical therapy. Chris responded with, “I’m prepared to do whatever it takes to get better.”

Chris came to Coury and Buehler Physical Therapy and had his initial evaluation with Brian P. Blanco, PT, DPT, OCS; the Clinical Director of our Anaheim facility. “I was confident. He was positive and gave me a good outlook on how to better my daily living as well as reach my ultimate physical goal of walking again,” said Chris. Since his initial evaluation, Chris is also working with therapist Jeff Brenner, PT, DPT, whose main goal for Chris is to get him stronger in hopes that he would be able to stand and possibly walk again on his own.

After numerous sessions of rigorous therapy with Brian and Jeff, Chris has improved tremendously. He has improved his strength and balance when sitting and standing. He is now able to walk with assistance using his walker for short distances, and is able to stand up alone using his own strength and without the need for internal electric stimulators which help him activate his muscles. “I’m getting stronger in a lot of areas,” exclaimed Chris, “especially functional movement, which is making me more positive for future improvements.”

Chris has learned to develop his own way of living and is now very independent and highly functional for a spinal cord injury patient. Chris’s life has once again changed; six months ago Chris was blessed with a new born baby girl. His biggest hobby is now being able to play with and hold his daughter, something that may not have been possible without physical therapy. Chris’s determination and good spirits help fuel his ability to continue progressing to his ultimate goal of being able to walk again.

Thank you for this opportunity to help you Chris. We wish you the best of luck with everything!